← more from
Dear Life Records
Get fresh music recommendations delivered to your inbox every Friday.
We've updated our Terms of Use. You can review the changes here. 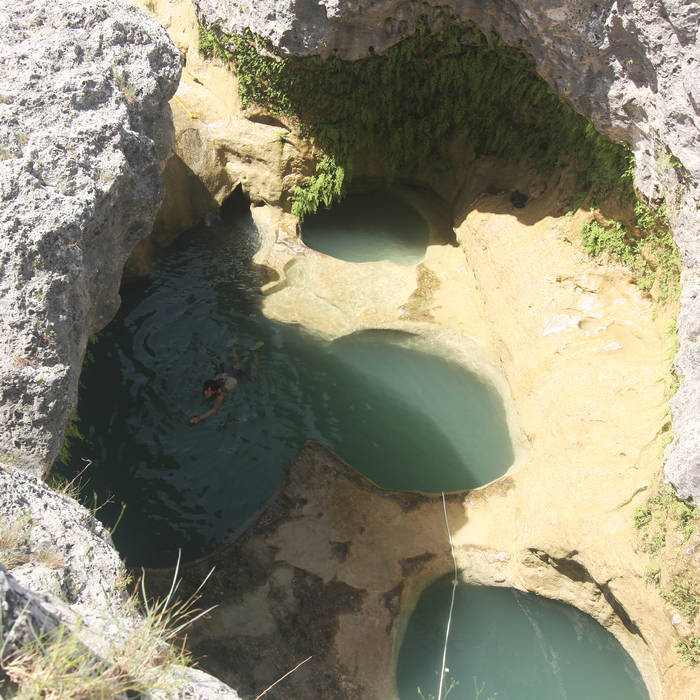 Craig Helmreich (of It's Just Craig)

A lot of famous musical Texans have passed through The Hole in the Wall, a small but legendary dive located near the University of Texas in Austin. Nancy Griffith, Lucinda Williams, Townes Van Zandt to name a few. Lindsey Verrill of Austin experimental/folk band Little Mazarn describes the club as “sweetly frozen in time. The outlet in front of the stage still doesn’t work, the ancient carpet almost glows with the bioluminescence of the flora and fauna that has been carefully cultivating itself there since the 1970s. The ghosts of Townes Van Zandt and Blaze Foley romp gleefully around the pool table.” This is where Little Mazarn formed back in 2015, “playing distorted sound experiments evolving into droney space versions of folk songs like ‘Darlin’ Corey’ and ‘Katie Cruel’. The group at its core is Verrill on vocals and banjo and Jeff Johnston, whose primary instrument in the band is the singing saw. They are both Dallas natives that settled in Austin and became a part of a music scene that included Bill Callahan, Dana Falconberry, Patty Griffin, Okkervil River, Thor Harris, Weird Weeds, and Daniel Johnston, among other Texas underground luminaries.

Verrill had never considered her own music particularly “Texan.” Regular touring can have that effect. You internalize a sort of rootlessness, a feeling of belonging to nowhere. You become a phantom, navigating a landscape where every gas station is the same gas station; where the next couch you sleep on is the same as the last couch, and you’re woken up by the same cat every night. Lindsey and Jeff were in the throes of touring in March 2020 when they got word that SXSW was being canceled due to the increasingly dire coronavirus pandemic. What was to be a year of extensive travel in promotion of their latest record (2019’s magnificent ‘Io’) instead became the longest continuous stretch of time Verrill had spent in Texas since childhood. Thus began Little Mazarn’s reawakening to their home state.

The band’s newest album, appropriately titled Texas River Song, was born from 2020, a year of river trips instead of touring and playing shows. Lindsey reminisces about “the Llano, the Frio, the Colorado, the Guadalupe, the San Marcos, the Pecos, the Devil’s. The rivers soaked up the burden of my sorrow and loss. I watched ospreys and bald eagles catch fish. I got sunburned and windsheared, broke my thumb and twisted my shoulder. Time on the river has no meaning, especially if you go out for days at a time. The return to the outside world feels like a far away appointment you know you’re going to be late for anyways. Why rush. A month, a season, a year. Sun has riz, sun has set, here we iz in Texas yet. Rollin on the river.”

Little Mazarn’s Texas River Song is a geographic love letter, inextricably linked to the land. It takes its name from a public domain song of mysterious but undeniably Texan origins. It’s no surprise that ‘Texas River Song’ became this album’s title and centerpiece, the beating heart of the whole project. The spirit of a place is a dynamic, living thing. Entire lives and stories can pop up like bluebonnets, with striking definition and clarity, if only we are patient enough to see them. This brings Verrill’s description of The Hole in the Wall to mind again. With their new album, Little Mazarn offers an invitation to become “sweetly frozen in time,” to leave behind far away appointments and seek out a quicksandy river of our own. “It is a Texas album” Verrill says, “ simply because it isn’t trying to be anything else. Crickets on Caddo Lake. Vignettes of lonesome hill country graveyards and starry prairie nights. Cowboys songs. Houston, Austin, and San Antonio. The quiet 4 walls of my room. I am a Texas musician simply by not trying to be anyone else or go anywhere else.”

Thank you to Britton Beisenherz, Jeff Johnston, Carolina Chauffe, Shannon Byrne, and Thor Harris for keeping the lamp trimmed and burning on this project.

The music of Little Mazarn is a cool float a few feet from the ground through a dimly lit, almost familiar forest. It is quieter than silence, big as everything, still but always moving. If you’ve ever had flying dreams, or an amazing night time bike ride on LSD, this might be a world for you. - Thor Harris ... more

Bandcamp Daily  your guide to the world of Bandcamp